Back in April I saw a bike frame on craigslist which really caught my eye. It was a 1994 Bontrager road lite. 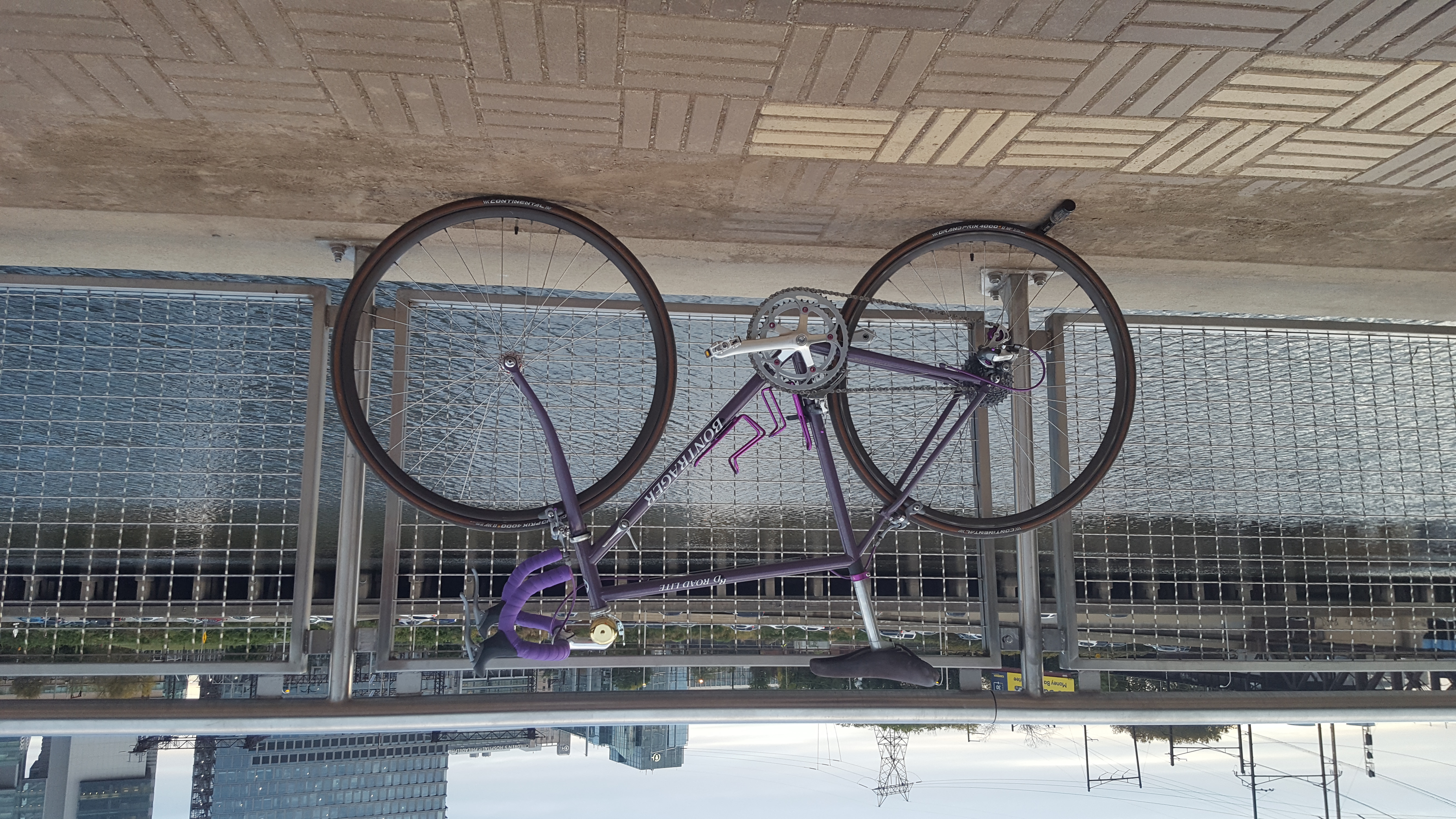 I, for one, didn't know until then that Bontrager ever manufactured bike frames. Certainly that they made wheels, tires, etc. but I'd never seen a bontrager frame and it really caught my eye. A few days later I borrowed my brother's subaru and drove out to meet the seller. The frame didn't look like it was in great condition, a chipped and fading paint, rust spots in a few places, and it had a quill stem stuck in it. But it was absolutely beautiful. every weld on it was gorgeous, and the extra gussets at some of the joints were absolutely intriguing.

Here's what the frame looked like when I got it home (note that the wheels did not come with the frame). 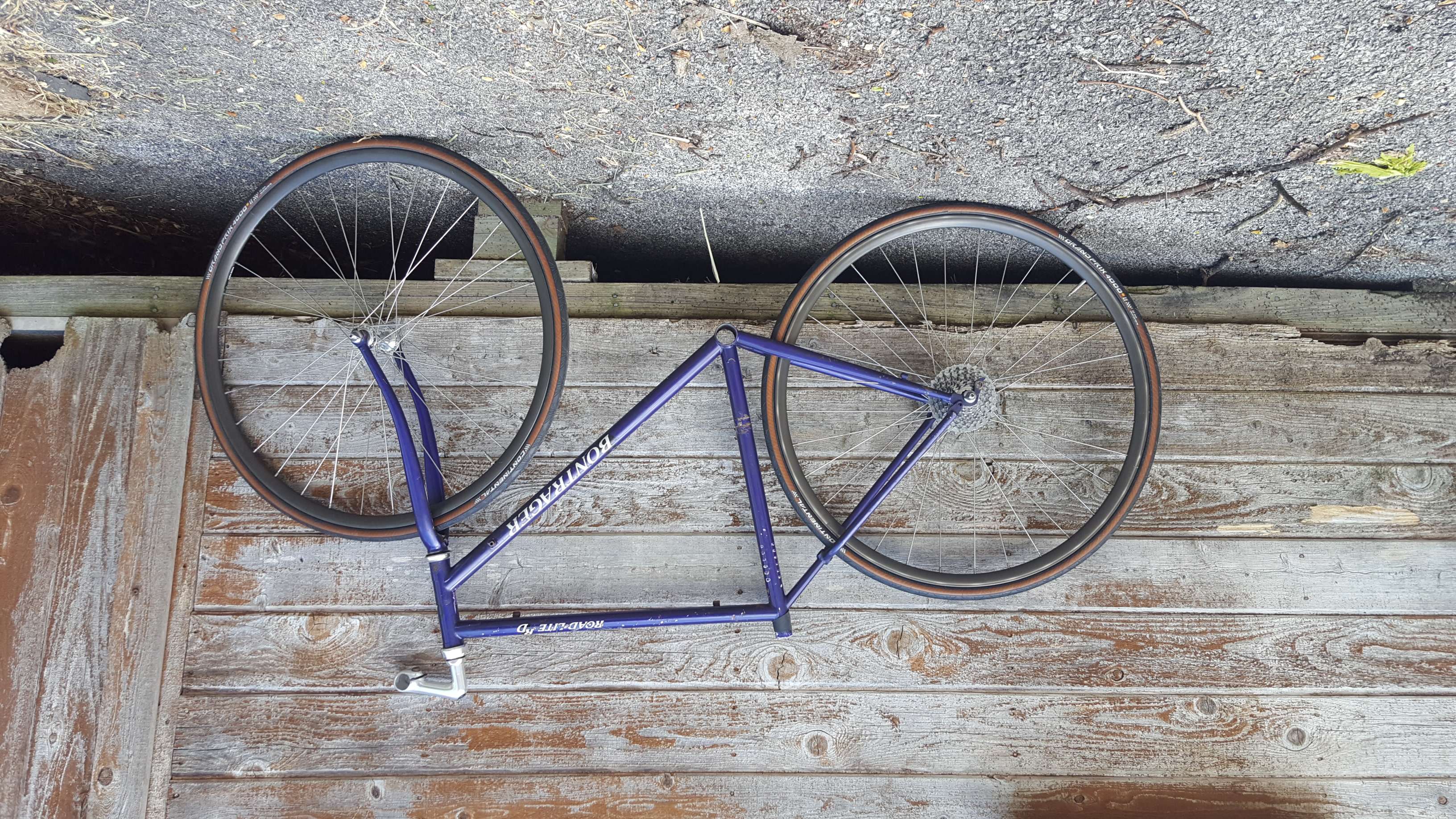 It had rust in a few spots. Around the front derailleur clamp was pretty bad, and there were spots on the top tube, among others.

It took a while for me to figure out exactly what I wanted to do with the bike. But eventually I decided that I would strip all the paint, then reprime and repaint it. So I spent a day in July with paint-stripper, and wire-brush wheels in my drill. And a few too many mostquitos /-:. The result was this. 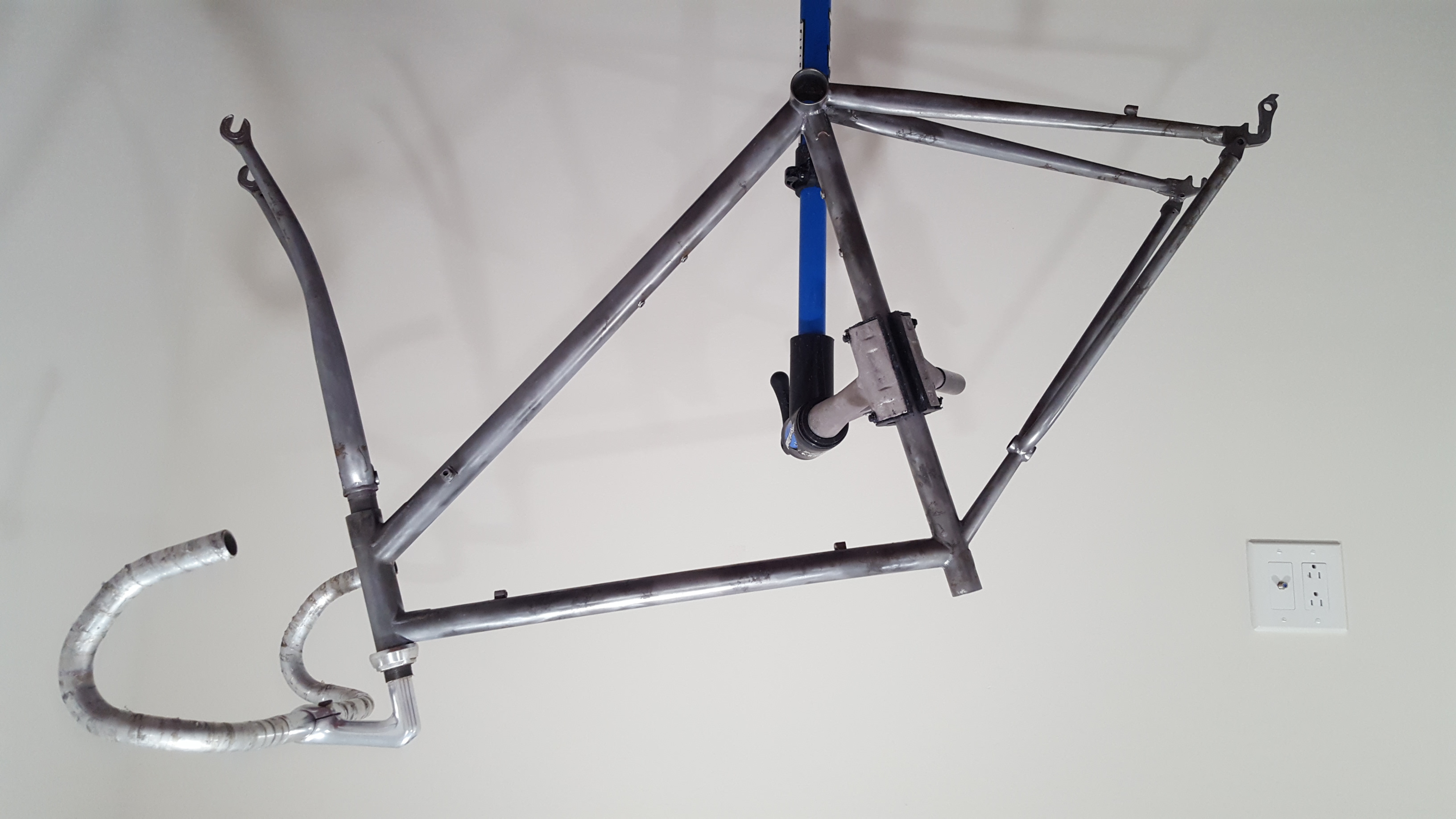 Next up was another round of waiting, this time for a good painting weather, cool and low humidity. I'd heard good things about "Spray.Bike", so I decided to give them a go, because I had no clue about painting bikes before this. I chose their Plumstead Purple with their "Keirin Flake" Multicolor as "clear" coat. So first week of September, I spent all day Saturday working off leftover bits of paint and rust with steel wool. Then I was able to spray primer, then color on Sunday, with touch-ups (obviously) between (work-from-home) meetings on Monday.

Decals I was able to order from VeloCals, and went on mid week, and "clear" the next Sunday. I found I was very sensitive to fumes as the paint cured, so the frame spent a few weeks sitting in my repair stand, in my spare bathroom (aside: It seems that these days a trans woman must hoard these things), with the vent on full.

For Parts, I decided on a full set of 8-speed Shimano 600 tricolor. Well. Truth-be-told, I'd had this set for a little about a year, and when the Road Lite came up on craigslist, I decided it would match nicely with set. I later found out that that Bontrager thought the same. Their 1996 Catalog shows the Road Lite with 600 tricolor, albeit with brifters to my down-tubes.

I got the finishing touch to the bike this week, a VeloOrange Bell which dings excessively loud. So queue the obligatory "artsy" photograph section. 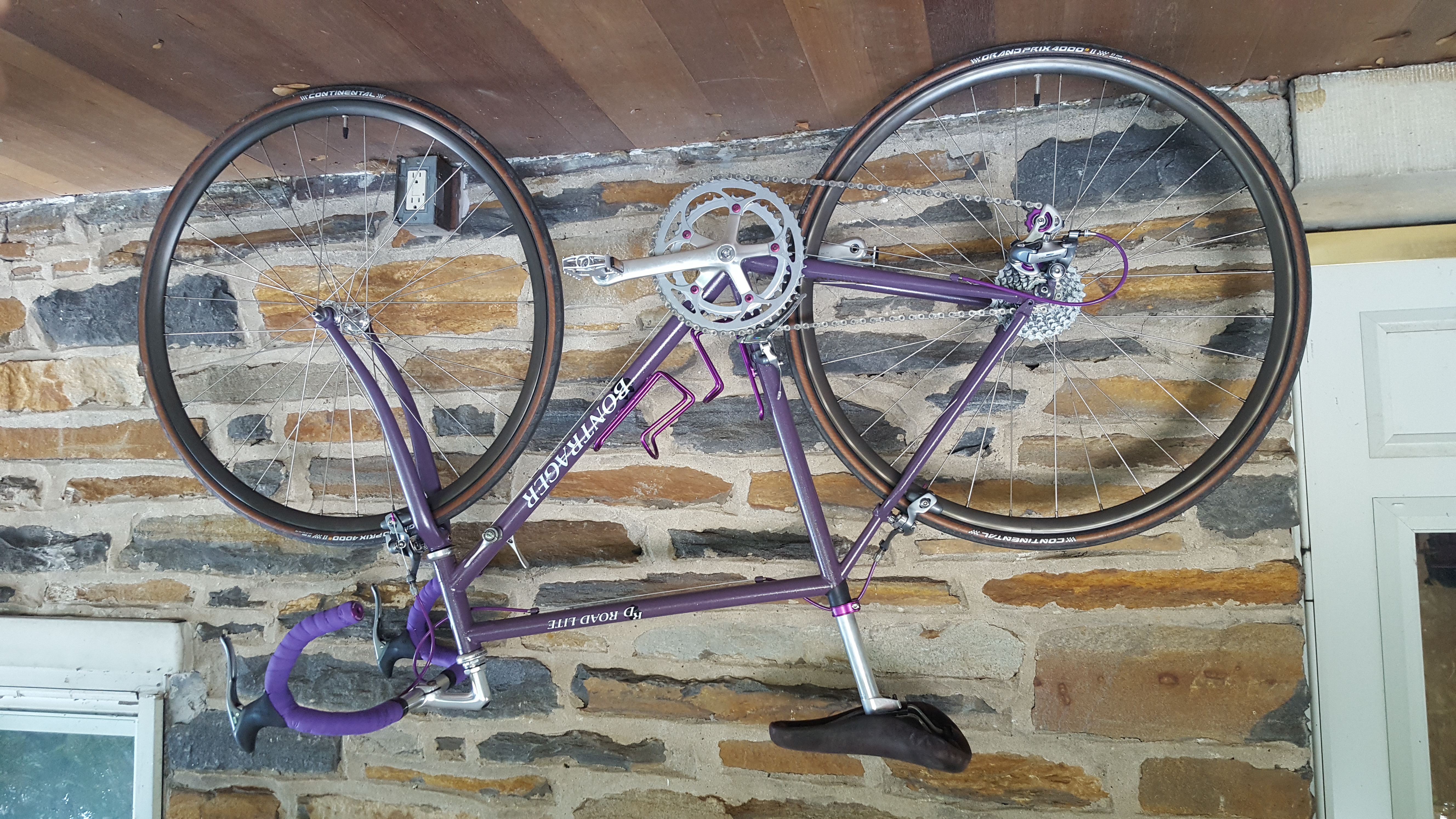 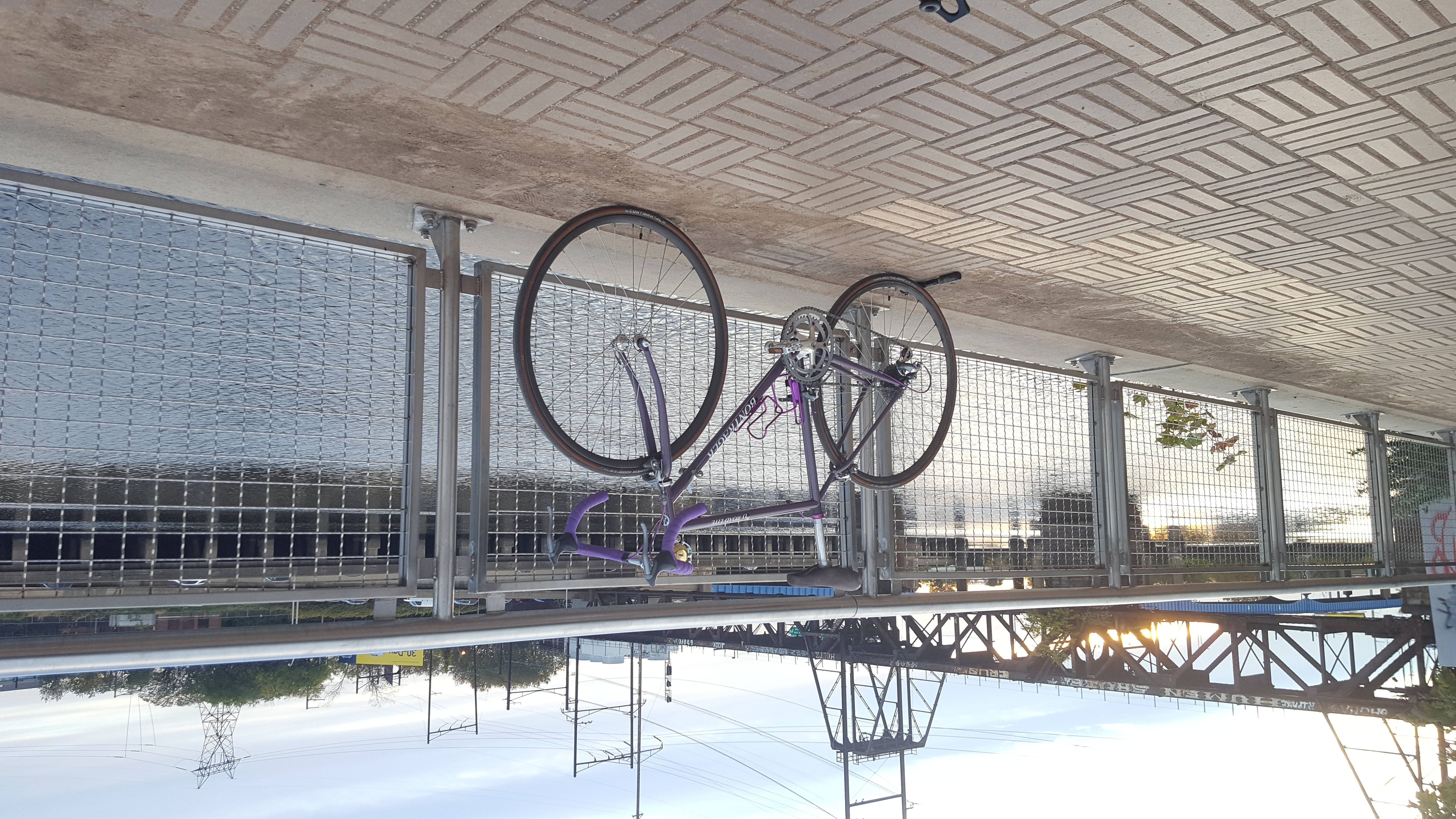 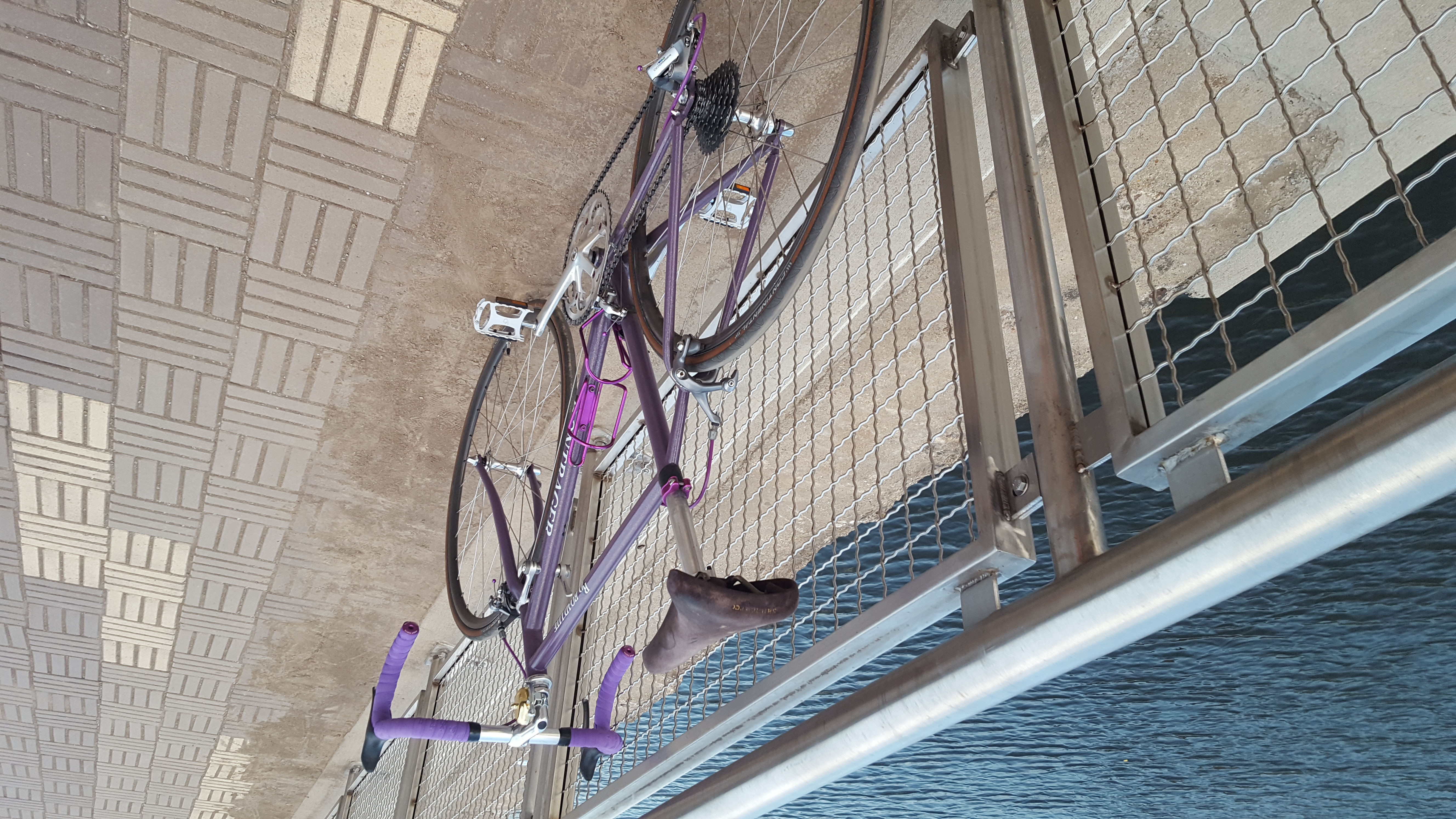 The final result (save for the saddle, which I haven't decided upon yet) is impressive to say the least. With 700cx23mm tires and aero-profile wheels, it goes like you would not believe for a bike which is older than I am. It cruises effortlessly, and the handling is agile without being twitchy. Suffice to say that I am absolutely stoked with this bike build.

I Made a Thing